How would a future President Donald Trump handle the high stakes negotiating of an international treaty if he can’t handle a mother’s request to pump breast milk for her new born child?

Watch Dana Bash’s interview with Donald Trump on “The Lead with Jake Tapper” at 4 p.m. ET and “Erin Burnett Outfront” at 7 p.m. ET. Share your thoughts on Twitter using #TrumpOnCNN.

(CNN)Donald Trump had an “absolute meltdown” when a lawyer requested a break from a 2011 deposition to pump breast milk.

“He got up, his face got red, he shook his finger at me and he screamed, ‘You’re disgusting, you’re disgusting,’ and he ran out of there,” attorney Elizabeth Beck told CNN’s Alisyn Camerota on Wednesday morning.

The incident was described in a letter from Jared Beck, Elizabeth’s co-counsel and husband, obtained by CNN and first reported Tuesday by the New York Times.

Trump’s attorney Allen Garten, who was present for the deposition, does not dispute that Trump called Beck “disgusting.”

Trump slammed Beck’s interview in a tweet to CNN Politics on Wednesday morning:

“Lawyer Elizabeth Beck did a terrible job against me, she lost (I even got legal fees). I loved beating her,she was easy,” he tweeted.

Sarah Palin serving in a Trump administration? ‘I’d love that,’ he says

Garten, executive vice president and general counsel at The Trump Organization, said Trump called Beck “disgusting” because she was about to use her breast pump in the middle of the deposition room.

“She was disgusting,” Garten said in a phone interview with CNN. “She was attempting to breast feed — to pump in the middle of a deposition, in a deposition room with five lawyers and was not excusing herself.”

Garten said Beck started to assemble the pump in the deposition room and “started to move the breast pump toward her breast.”

He claimed Beck orchestrated the stunt because “she ran out of questions and she didn’t know what to do.”

“This is not about breastfeeding … it’s just not,” Garten insisted.

Beck painted a very different picture, saying Trump was the one whose behavior was “unprofessional” and displayed a “lack of self-control.”

“What kind of a leader of the United States would that be? Is he going to behave that way when he’s negotiating treaties with China or Russia?” she said.

Beck insisted that the breast-pumping break was set to coincide with a pre-scheduled lunch break at 12:30, but that Trump decided at the last minute he did not want a break. An email exchange between Beck and a law firm representing Trump shows a lunch order was made and set to arrive around noon.

Garten disputed that, insisting the only pre-scheduled break was one set for 3 p.m. for Beck to pump breast milk privately in a separate room.

And Trump was intent on proceeding through the deposition without any additional breaks, according to a transcript of the deposition CNN obtained through public records.

He even refused to take a break when one of his attorneys requested to go to the bathroom, instead insisting another lawyer could take over and allow the deposition to continue.

Trump on debate preparation: ‘I am what I am’

Trump’s testimony stemmed from a lawsuit over a failed real estate project in Florida in which the Becks represented clients who claimed they lost tens of thousands of dollars each. 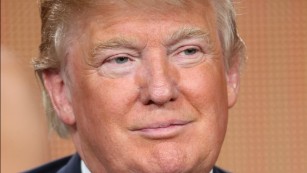 The breast-pumping incident wasn’t the only time Trump insulted the attorney during the deposition, according to a transcript of the deposition obtained by CNN.

“Do you even know what you’re doing?” he asked her at one point.

In the end, the Becks lost one of their cases against Trump and are appealing.

News of the “disgusting” remark came on the heels of another rhetorical controversy swirling around Trump.

Facing questions about a decades-old rape accusation against Trump, one of his top aides and attorneys Michael Cohen told the Daily Beast that legally “you cannot rape your spouse.” In fact, marital rape has been illegal in all 50 states for more than two decades.

Cohen apologized Tuesday for the remark, calling his comments “inarticulate” but insisting that he had been enraged by the reporter’s “gall” to ask a question about the accusation.

The rape claim stems from an accusation Trump’s then-wife Ivana Trump leveled at her husband during divorce proceedings in the early 1990s, an allegation she walked back Tuesday.

CNN Finally Calls Out TRUMP’S Manager – On TRUMP’S MANY LIES!

Here Are 12 Of The Stupidest Things Ever To Come Out Of Donald Trump’s...

The Untruths of Donald Trump

The Untruths of Donald Trump

ABOUT US
This Joker Must Exit Stage Left!!!
Contact us: impeachtrumpnet@gmail.com
FOLLOW US
© Copyright 2015 - Newsmag by TagDiv